Throughout The University of Tulsa’s history, The University has embraced the importance of a library to the academic community. In the First Annual Catalogue of Henry Kendall College, Muskogee, Indian Territory, 1894, a page was set aside declaring the needs of the college. The first need was scholarships — $100 would pay all expenses for one student for one year. The second read:

The Library stands greatly in need of reference books, especially in history, science and English language and literature. The college greatly needs $500 for library purposes. One hundred dollars just at this time would relieve a part of the extreme necessity. An endowment fund would advance the work greatly. 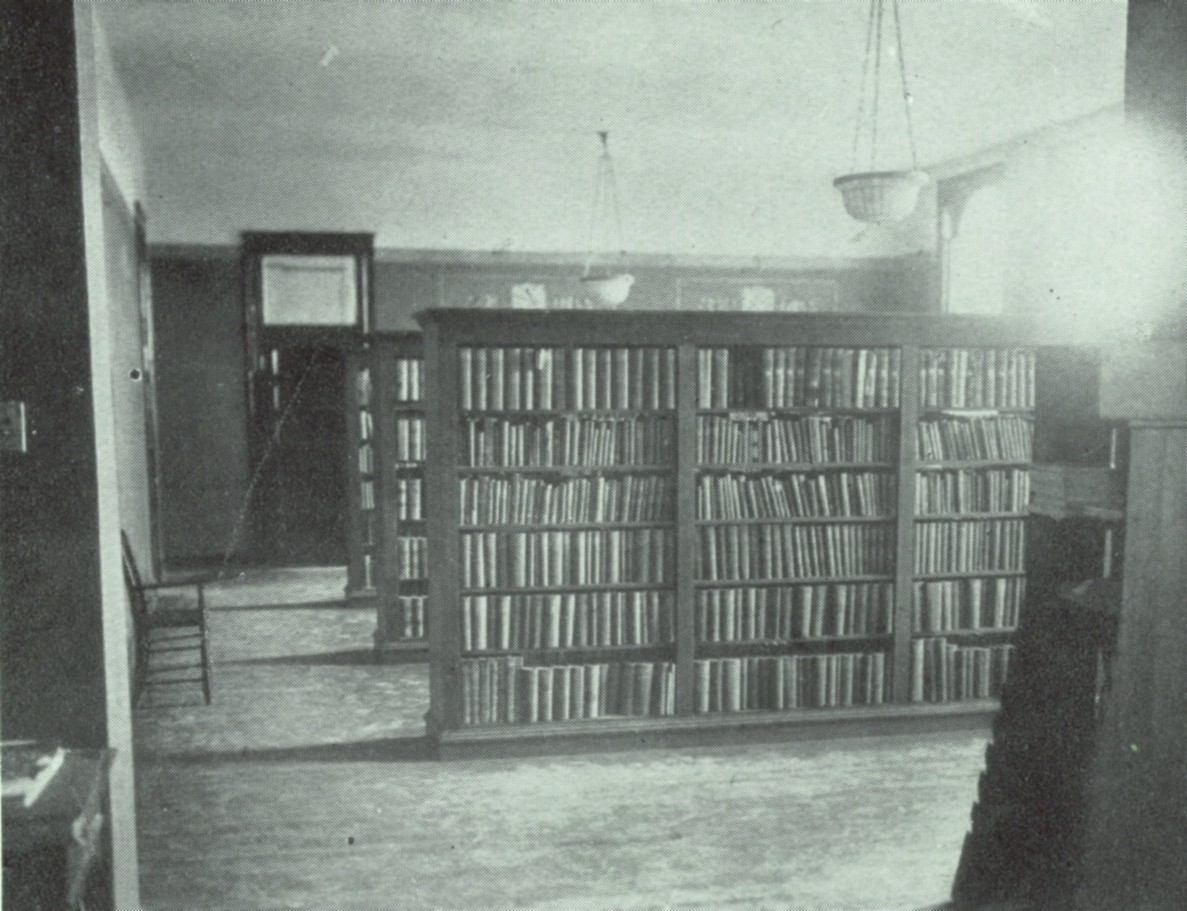 By 1928, The University of Tulsa had 16,000 books and was in desperate need of a dedicated facility to serve the student population. 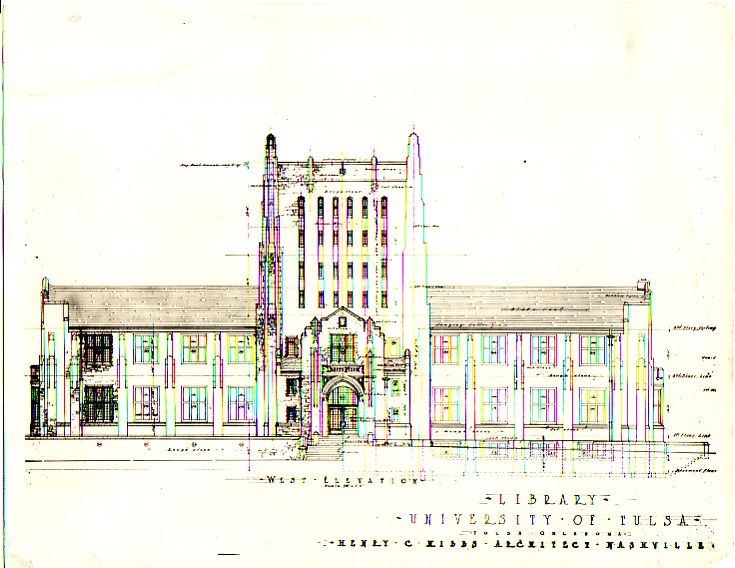 McFarlin Library was built in 1929 at the same time as the Tyrrell Fine Arts Building and the Phillips Petroleum Engineering Building. McFarlin Library was the first of the three to be erected and was selected as the central feature. The library became the major axis of campus and its location dictated the future growth of the campus.

Robert M. McFarlin and his wife, Ida Mae Barnard McFarlin, donated the structure, as well as the book stacks and the furnishings. McFarlin, a successful Tulsa oilman and rancher, was well known for his contributions toward church and educational memorial buildings. 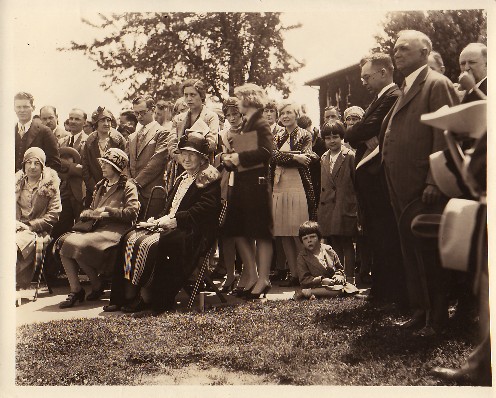 At the groundbreaking for the new library, on May 3, 1929, John Rogers, a University Trustee, stated, “This building will be probably the most important on the campus for it is in reading and in books that our finest wisdom is stored.” 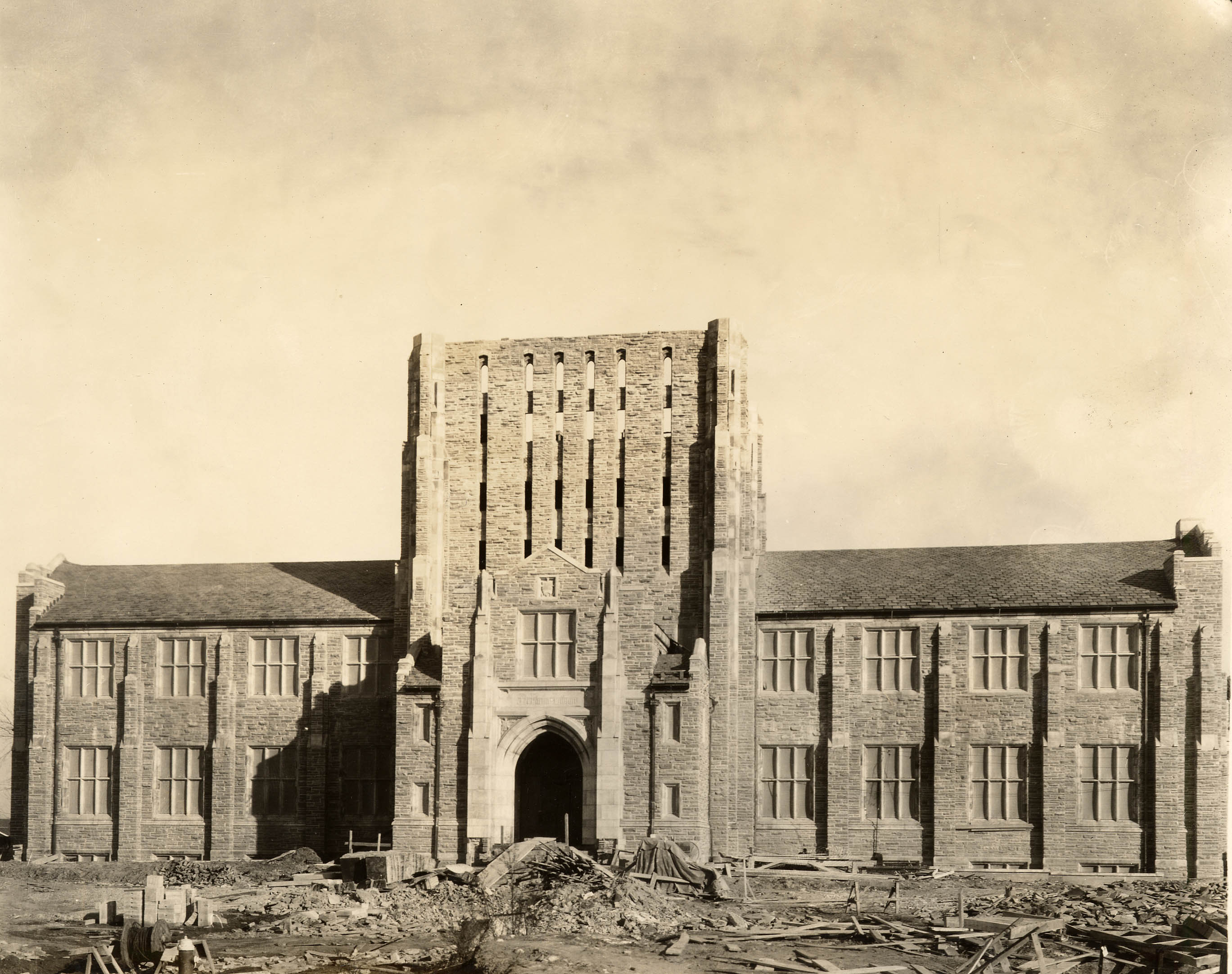 The new Library, standing at the head of the “U”, was designed by Henry C. Hibbs, a Nashville architect, and built by Bellows Construction.  The building was constructed primarily of sandstone and limestone with no steel frame and 15-24” thick walls of solid stone, furred inside with 2” clay tile, and featured a slate roof placed on a tongued and grooved wood sheathing over a concrete slab, copper guttering and flashing, and leaded cathedral glass windows with stained glass medallions

The tower in the middle of the building originally contained an electric elevator, stairs, and a spiral book chute. The first floor had the card catalog room, the librarian’s office, staff workspace, the lobby, and vestibule. The other three floors and their mezzanines were devoted to book stacks.

Because The University had more students living off campus than on, locker rooms were installed in the basement, men’s on the north side and women’s on the south. The women’s locker room had several daybeds where the women could rest. Reading Rooms were situated in both the north and south wings on the second floor.  The north wing on the third floor was the "Indian Museum." A Browsing Room was provided in the south wing of the third floor.  Stenciled acousti-celotex ceiling tiles decorated the spaces between the beams of the ceilings in these rooms.

At the dedication, on June 1, 1930, guest speaker J. L. Rader, University of Oklahoma Librarian, proclaimed, “The library is the only unbiased force left in the world. The library is the only place where one in quest of knowledge may go and pursue his studies without outside influences being brought to shape his opinion. The library presents every side of a question without itself taking sides, leaving the reader to form his own opinions.”

The new McFarlin Library was dedicated by L. S. McLeod, Acting Dean of the College of Arts and Sciences, with the following words:

"In memory of those great teachers and scholars who  have labored through the centuries, and have  bequeathed to us in written form the fruits of their toil /We dedicate this building

That comradeship here may be found, scholars of all interests, masters and disciples in the way of learning,  people of the school and people of the city, sharing  together the treasures of learning /We dedicate this building." 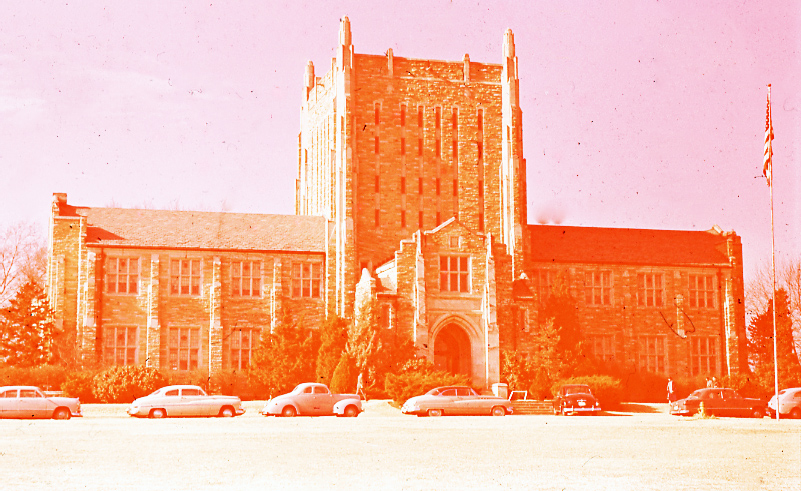 One area that made the library popular with the students was the Browsing Room, a place where students could actually place their hands on a book, without having to have it retrieved from the closed stacks by a staff member. 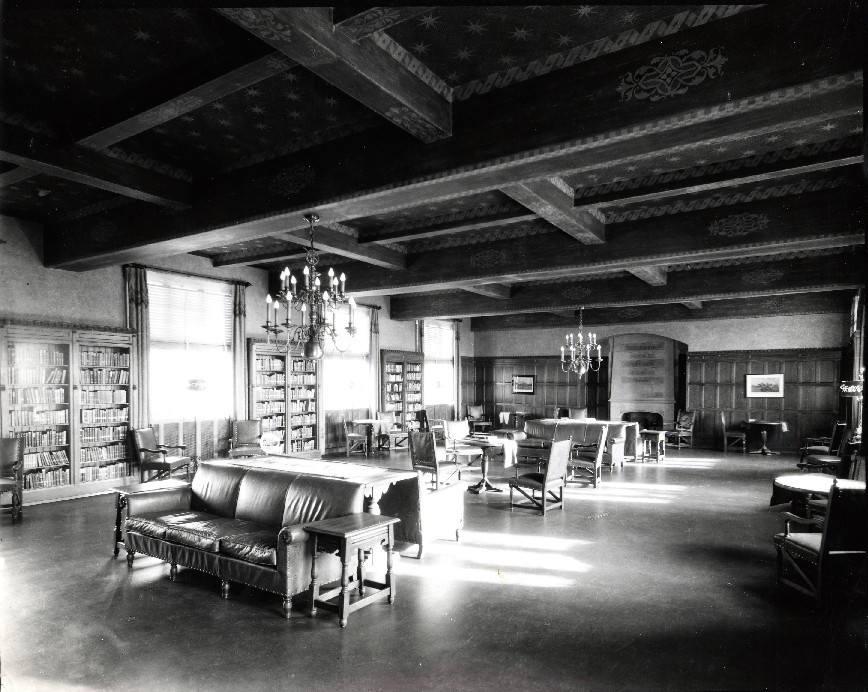 The Circulation desk, where books were also requested, was located just inside the Main entrance, from the “U” on the west side of the building. 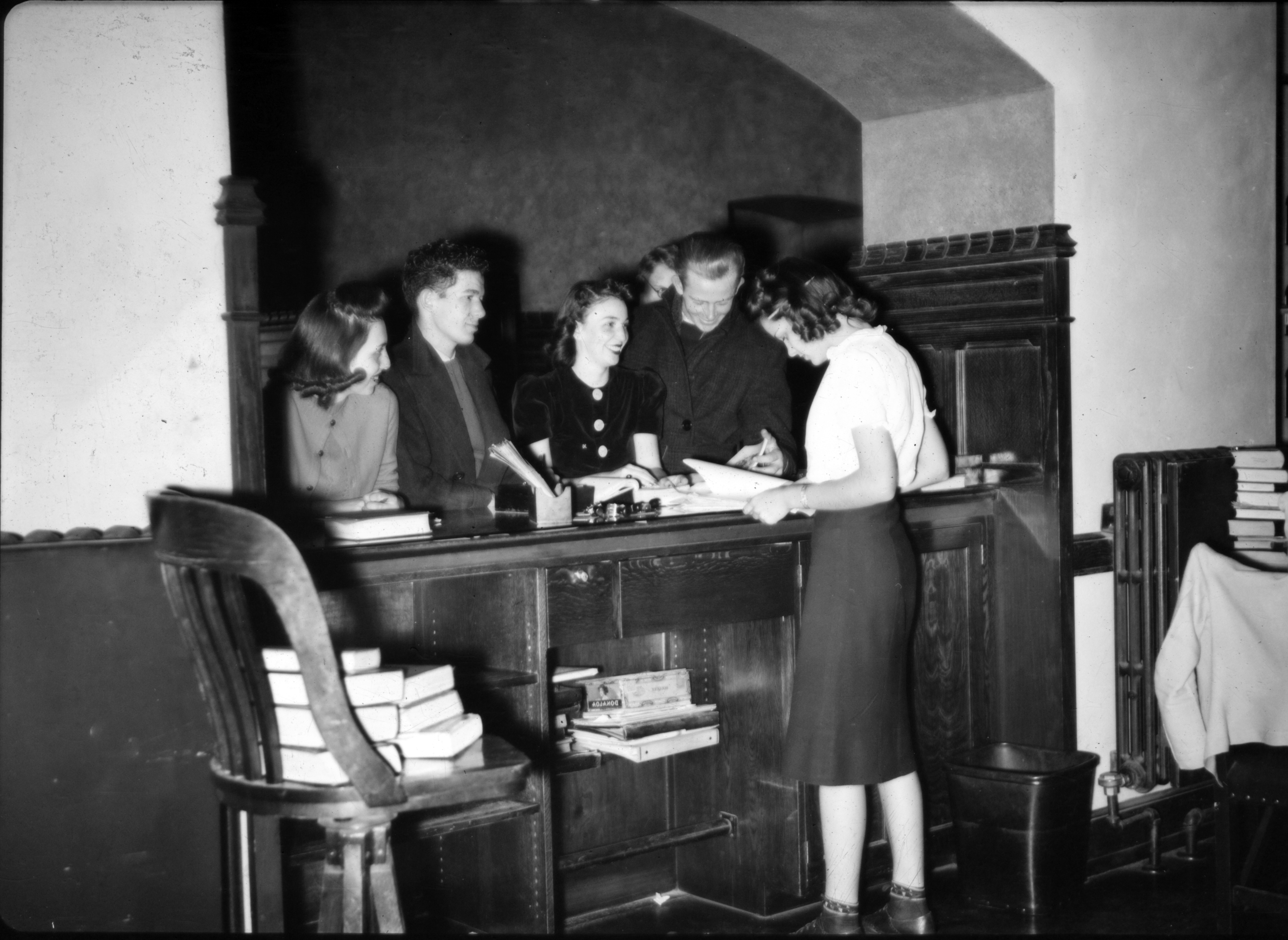 In 1961, air-conditioning was installed through the construction of a large underground tunnel/fallout shelter that also carried chilled water from the Student Activities building to McFarlin. Four large air-handling units were installed on the third floor of the Library. During this project, the dynamite used to open the exterior wall cracked the tower, which, according to witnesses, “rang like a bell.”  During this time, the rest of the building was renovated to modernize the work spaces. 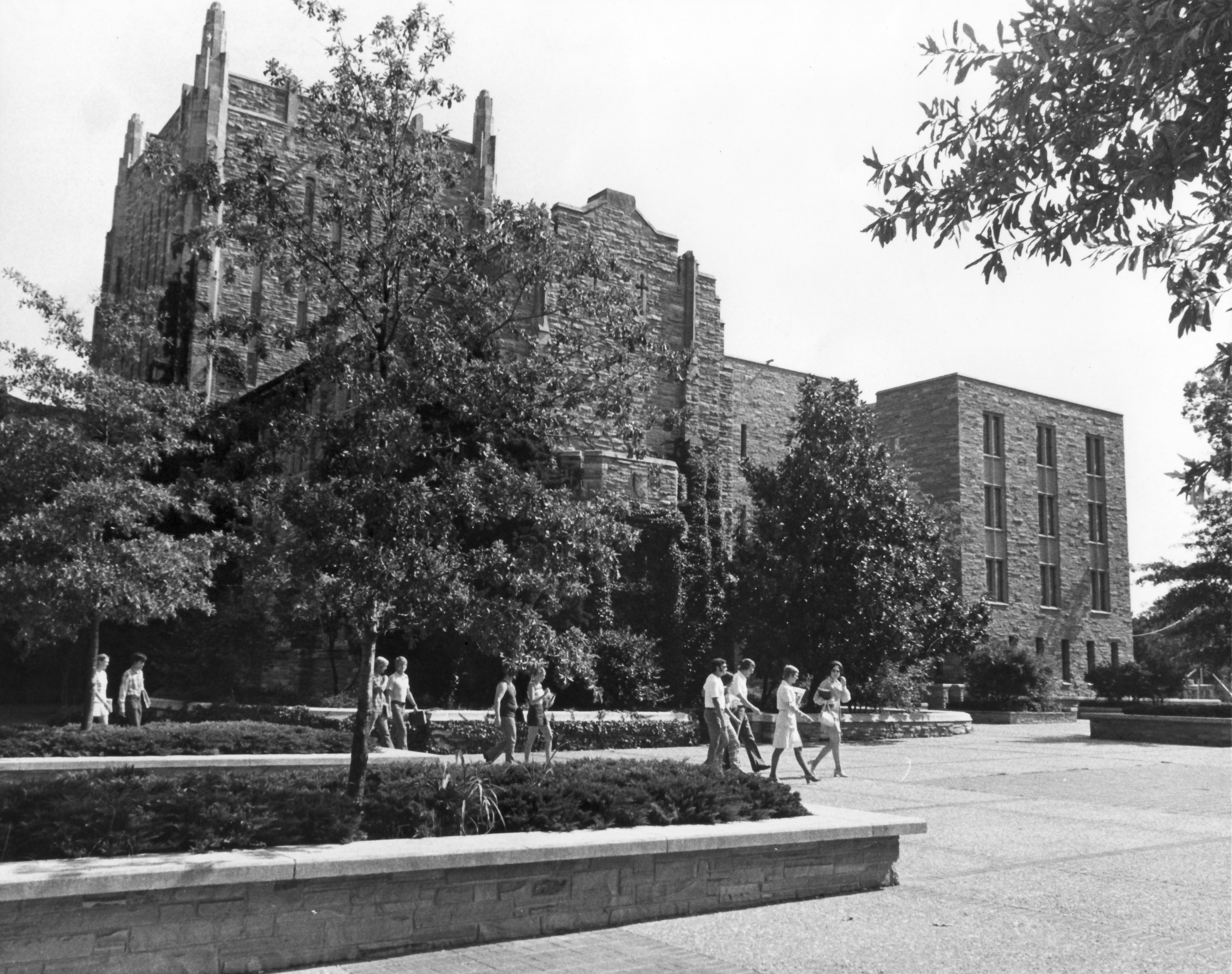 Over the years, as The University of Tulsa’s educational offerings expanded, so did the need for a larger library that could support more undergraduate and graduate programs. In 1967, the east wing of offices was demolished and a new, larger east wing, designed by H. G. Barnard Jr., was constructed. This added five new floors of offices and shelving areas, providing space for the additional research materials that would be needed to support new Ph.D. programs in English and engineering. Tulsa Rig Reel & Manufacturing Company was the general contractor, and features such as the original bathroom tile style were carried over into the new addition. 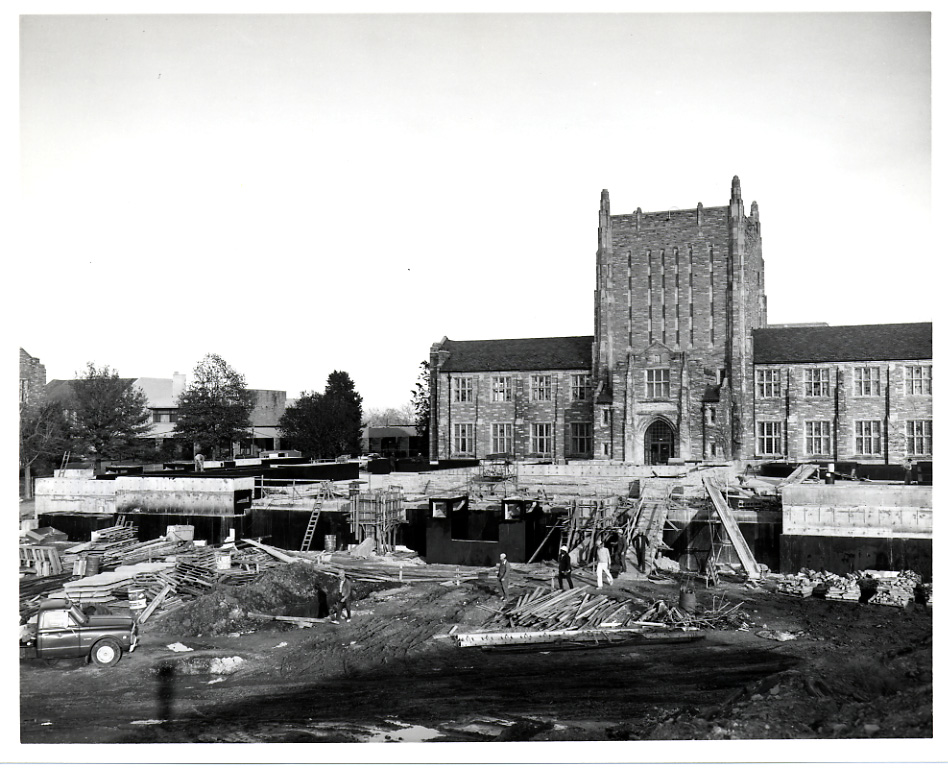 However, the needs of the Library and The University continued to grow and, beginning in 1977 and coinciding with the acquisition of the one millionth volume, a completely new addition was constructed.  The original front, west porch was removed and three floors of underground stacks space was built around a sunken open atrium. McCune McCune & Associates and H. G. Barnard Jr. were the architects and Flintco was the general contractor. The roof of this addition was designated the Albert Plaza in 1979.

In 2005, McFarlin Library celebrated its 75th Anniversary with a variety of events including an open house during Homecoming and an event in April 2005 featuring Richard West, founding Director of the National Museum of the American Indian. Thomas Staley, Director of the Harry Ransom Research Center at the University of Texas at Austin spoke at the official rededication ceremony on June 1, 2005.

In 2007, the Pauline M. Walter Technology Resources Center was constructed to create a technology wing on the north side of McFarlin Library. The new technology wing provided computer lab and classroom space, as well as creating a new entrance and foyer on the north side of the building.  At the same time, the interior of the existing building underwent major renovations that included the addition of a staircase and a café, and a complete remodel of the north and south Reading Rooms on the Main Level and the Faculty and Student Studies on the third floor. Hasting and Chivetta Architects, Inc., St. Louis, Missouri designed the addition/renovations and construction was done by Lowery and Hemphill Construction. 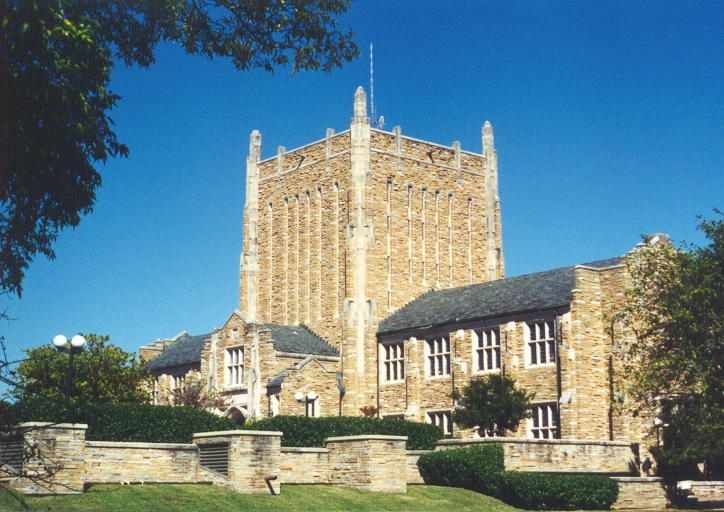 In February 2007, McFarlin Library welcomed its first Robert and Ida McFarlin Dean of the Library, Adrian Alexander. In September 2009, the building was rededicated to celebrate the addition of the Pauline M. Walter Technology Resources Center. The rededication also unveiled the extensive renovations to the older areas of the building, supporting the use of McFarlin Library as an academic commons for The University of Tulsa campus community.